Theology and Science: A Coinherent History of Ideas, part 1

Theology and Science: A Coinherent History of Ideas, part 1

The following is a public lecture given by Ross Hastings in conjunction with the release of his book Echoes of Coinherence: Trinitarian Theology and Science Together, September 26, 2017. This publication was made possible through the support of a grant from the John Templeton Foundation. The opinions expressed in this publication are those of the author and do not necessarily reflect the views of the John Templeton Foundation. 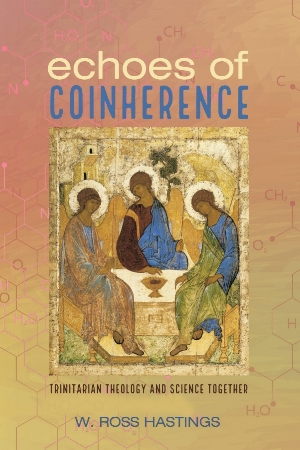 Let me first express my deep gratitude to the Chee family for their great generosity in their sponsorship of the Sangwoo Youtong Chee Chair in theology which I am honoured to occupy here at Regent College.

This will be a lecture introducing my latest book, Echoes of Coinherence: Trinitarian Theology and Science Together, and will be focused on chapter 3, “The Coinherent History of Ideas” in theology and science.

What is coinherence? The idea that two entities can be in each other and still be what they are. In-ness without merger. This concept comes from a theological source. The two natures of Christ, his divine nature and his human nature are each in the other, yet he is not a mixture of these natures, as each remains distinct. There is indeed even an asymmetry about this relationship in that it is the divine Son who takes into himself our humanity. Similarly, in Trinitarian theology, the persons of the Godhead are coinherent. That is, each is in the other, yet each is not the other.

By way of analogy, rather than univocity, I offer examples in the book of echoes of coinherence in the creation God has made, from an ontological perspective. I do so with care: this study does not encourage an overly facile form of vigilant Trinitarianism that looks for images of the Trinity everywhere, in three-leaf clovers, in water as liquid, ice or steam, in Russian dolls that fit the one within the other, and so on. All analogies for the Trinity are inadequate and in some cases they are either modalist or tritheistic, and therefore, heretical. However, I will suggest that there are conceptual resonances of the Trinity in creation, mediated by the incarnation. If the creation bears the marks of its Creator (and its incarnate Redeemer), this will not be a surprising claim. The creation is, according to Gunton, a “perichoresis of related systems.” (70)  In physics, Buxton comments on the new awareness that “everything in the universe is bound up with everything else”—indeed, that “all things are what they are because they are related to everything else.” (71) One could add from the chemist’s perspective that there is also a remarkable common constituency to all matter, whether terrestrial or extra-terrestrial, and a tendency for elements to bond in accordance with electron affinities— but enough on that for now.

I also suggest in the book that how humans know what they know in both theology and in science is coinherent. That is, the epistemology in both disciplines is the same. It is one of critical realism, of personal knowledge (Polanyi), an acknowledgement of the myth of pure objectivity. In a way that resonates strongly with the Trinitarian sentiments of theologian T.F. Torrance, theoretical chemist Werner Heisenberg “states incessantly, in agreement with Husserl, Heidegger, Gadamer, and Cassirer (whom he knew personally), that one has to suppress any rigid distinction between Subject and Object.”

I argue therefore against the view that theology and science are in conflict, the old warfare model. This is the model being perpetuated by Richard Dawkins, for example who recently said, “Darwin kicked God out of biology but physics remained more uncertain. Hawking is now administering the coup de grace.” I argue even against the more respectful model of Stephen Jay Gould that theology and science are non-overlapping magisterial. I offer even a nuancing of the mutuality model of Padgett, suggesting that theology and science do have profound mutuality but that they are their own distinct disciplines, that is, that they are indeed mutually interpenetrating without merger, without loss of identity... which is to say, coinherent.

In other words, in this book I hope to offer a framework big enough to hold both disciplines—one that accounts for epistemological and ontological resonances between God, his creation, and science. I suggest therefore that the disciplines or thought areas of Christian theology science are coinherent. I do so in such a way that preserves the primacy of theology as the ‘Queen of sciences.’ This is a metaphor used since medieval times to describe theology as the overarching discipline which held together and governed all knowledge in all other fields of study).

Thus, there are in fact three primary goals in our study. I describe, support, suggest. I describe and offer explanation of the coinherence concept from the incarnation and the Trinity. I support and clarify claims of the legitimacy (and limits) of the application of coinherence, by way of analogy, to humanity and creation. Scripture and the tradition speak of humans as the image of God, and the tradition, building on biblical inferences, speaks of the non-human creation as containing traces of the triune God. This leads us to demonstrate various resonances between the nature of God as Trinity, Trinitarian theology, and various aspects of creation as discovered by science. Thirdly, building on these resonances between Trinitarian theology and science, I suggest that they may as disciplines be considered to be coinherent.

I can’t hope to do all of that tonight, and so I want to focus only on how the ideas behind Christian theology and science in their historical development are surprisingly coinherent. Before I do that, let me highlight the urgency of this matter.

As I have said, the need for conciliation between Christianity and science arises first out of perceived differences in how we know what we know in each case. What plagues so many of us as members of Western society, ensconced as that society is within enduring Enlightenment assumptions, is, charitably, that these disciplines operate in different realms of knowing. Science is sometimes deemed to be the realm of objective thinking based on hard evidence, whilst religion is assumed to be the subjective realm, along with the values and the arts.  On this account, only science, for it deals in facts, can be present in the public square. Religion, because it deals with feelings and values and wishes, belongs in the private realm. These unfortunate assumptions have bifurcated and impoverished the intellectual life of Western humanity, thereby de-humanizing it.

British scientist and novelist C.P. Snow exposed this problem for Modernity as far back as 1959, when in his Cambridge Senate House address (now published as The Two Cultures and the Scientific Revolution) he declared that Western intellectual life was split into the titular two cultures of the sciences and the humanities and that this was a serious obstacle to solving the world’s problems. The burden of his address then seems to have been the lack of scientific knowledge within a British culture which at that point favoured the arts. Applying this to the contemporary Christian church in the West has some real traction. The scandal of the evangelical mind has been well reported in general, and specifically with respect to knowledge of science. Though it was aimed at the many arts-oriented folk of his time, Snow’s rebuke might justly be applied to those contemporary evangelical Christians alarmed by the findings of astronomical and biological science in particular. The people of Britain in Snow’s time could not give definitions of “the Second Law of Thermodynamics, let alone “mass, or acceleration which is the scientific equivalent of saying, Can you read?” The “great edifice of modern physics” was going up, said Snow, “and the majority of the cleverest people in the western world” had “about as much insight into it as their neolithic ancestors would have had.”

But if the primary barrel of the guns of Snow’s diatribe had to do with a scientific deficit, in today’s very technological Western societies, it is possible that it is the second barrel of the arts and theology that needs to be fired more urgently in our times. The brilliant work of Iain McGilchrist provides the critique of modern western culture that it is demonstrating symptoms on a large scale that result from the dominance of the left hemisphere of the brain such that the right hemisphere is under-developed and under-used. The right hemisphere, the ‘Master’ which governs metaphor, music, imagination, poetry and faith, is intended to take the lead, whilst the left hemisphere, which crunches the numbers and writes the texts and facilitates the details, is designed to back it up (hence, the ‘Emissary’). The result of left brain or Emissary dominance in Western technological culture, according to McGilchrist, has taken over the right brain Master, which, in a culture, has the same effect as when the bean-counters take over in business. For McGilchrist, the larger purpose of being human—living into the good, the true, and the beautiful—is thus sacrificed for bean-counting.

If McGilchrist is to be believed, then what is at stake in the science-theology divide is the very question of what it means to be human. In Western society the dualism of reason and faith, or fact and value, has served to distance science and Christian theology. This robs science and scientists of the wider context and meaning of their discoveries. One of these is the loss of awareness of the particular context of the social and global arena of science. I refer to the theological context of the doctrine of creation and the cultural mandate of the early chapters of Genesis, involving the stewardship and care of creation. Given that knowledge and care of creation is one of the important dimensions of what it means to be made in the image of God, and therefore to be human, the loss of this perspective is regrettable, diminishing something of the richness of the vocational significance of being a scientist. A loss of the awareness of a God who is both large enough and small enough (the specifically triune God who is both transcendent and immanent) to create and sustain the cosmos whilst granting to creation and humans a freedom to be derived in his freedom, and to participate in its own creation, also robs the scientist of a doxological and priestly orientation. The ability of scientists to perceive more than facts, but also the beauty of the creation, from molecule to galaxy, and to create what is beautiful, in light of the beauty of the triune God, is also robbed of its wider context.