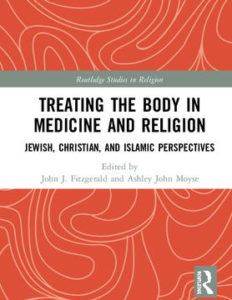 Ashley Moyse, a former Postdoctoral Fellow in Theology and Science at Regent College, recently published recently published a collection of essays co-edited with John Fitzgerald in the Routlege Studies in Religion series. Treating the Body in Medicine and Religion had its roots in the Third Annual Conference on Medicine and Religion where scholars laboured to respond to questions that emerge from the practice of medicine, which exists because of the need to attend to physical and psychical limits and frailties. Yet with the arrival of genomic medicine, novel biotechnologies, and fringe sciences, contemporary medicine also pursues ever-new possibilities for our bodies. In such a climate, biomedical professionals find themselves confronting pressing questions: What is the relationship between body and soul, and between individual persons and the community? To whom does the body belong? What is the norm and ideal for human bodies? How should medicine response to suffering and death?

This book has taken up such questions, and others, from the perspectives of Judaism, Christianity, and Islam and features contributions by the late H Tristram Engelhardt, Jr., as well as Ingrid Mattson, Elliot Dorff, Jeffrey Bishop, and D Gareth Jones, among others.

Prof Celia Deane-Drummond, currently Professor of Theology at the University of Notre Dame and appointed inaugural Director of the Laudato Si’ Institute at Campion Hall, Oxford, recently wrote a review of the book, which you can read below:

This book is a timely one, in that it is poised to make a highly significant contribution to current debates in medical bioethics. It is adventurous on two grounds. First, it challenges the common assumption that Western approaches to bioethics, dominated by secular principled approaches, most notably the school of thought pioneered by Beauchamp and Childress, is all sufficient. Secondly, it refuses to accept that only a specific Christian denominational approach has coherence, given the diversity between different Christian traditions, quite apart from their differences with other religious traditions. Instead, having faced the former challenge through being inspired by Jeffrey Bishop’s significant contribution to the debate, and the latter challenge by facing up honestly to the critique of the project as a whole offered by Tristram Engelhardt, the argument proceeds to be built that actually finding those who are prepared to engage in common ground across disciplines and across religious disciplines is a genuinely worth while and fruitful exercise.

All I can offer here is a few illustrative highlights of this richly rewarding book by a very diverse range of scholars, including those who are medical practitioners, professional bioethicists and religious scholars from Christian, Jewish and Islamic backgrounds. Each contributor engages with medical issues, and some across different religious divides, though the threat of understanding the body, respecting the body and the body at the end of life builds towards more specific recommendations in practice. At the background is Jeffrey Bishop’s rejection of efficient causation as being a sufficient basis for modern medicine, fixed as it commonly is on the practices of objectification, mechanisation and control.

My own perception is that the time is now right for an alternative such as the one laid out in this volume. Ashley Moyse’s provocative contribution on the body of Christ and the role and gift of the Eucharist in Christian belief challenges any view that such rich symbols of Christian thought are somehow irrelevant to secular medical ethics. An opposition to mind and body dualism that surfaces in Matthew Vest’s discussion of Ravisson’s philosophy of habit that reaches to the depth of life itself shows that there are alternative secular philosophies that can and do tackle the age old problem of a split between spirit and material existence. Virtue ethics is, of course, not far behind here. Surgeon Jack Mostwin acknowledges the importance of the principle of reverence for life, which also connects with this theme.

In a fascinating comparison of Moses Maimonides and Thomas Aquinas, John Fitzgerald shows the way in which dialogue across specific ancient medieval texts can still shed light on contemporary problems in medical bioethics. Another really interesting chapter is one by Cortney Hughes Rinker who, in an original and different tone, shows how the basic hygiene practices taken for granted in American culture are actually in keeping with Islamic religious traditions. Timothy Carey also joins the chorus of those who are convinced that a theologically orientated bioethics has something important to say to secular approaches to medicine, in particular that relating to shared virtues of justice and compassion across Catholic and Muslim scholarship.

Susan Zinner’s portrayal of dying through narrative accounts of Daudet and Hitchens provides another important dimension, namely, a patient perspective. As the death of the body is approached towards the end of this volume, theological themes of the resurrection and soul rendered through the influential texts of Augustine of Hippo are not far behind.

Overall this book will be invaluable not just for medical bioethicists who have only a vague notion that something to do with spirituality is likely to be important, but also for Christian theologians working in this field. This book will be important for them, even if they are writing from a standpoint of being within a specific religious or sub-religious tradition.  As a student text it is bound to stimulate further discussion and debate.